Just a little ways off Kyoto is a small city called Uji, whose claim to fame is its green tea.

More than the green tea, though, Uji has important cultural and historical significance. Being situated just south of Kyoto and north of Nara, Uji itself rose as a cultural center especially during the Heian period (794–1185) along with the two former capitals. Uji City is now known for a couple of World Heritage Sites and for being the setting of the closing chapters of The Tale of Genji.

You should take a day trip to Uji before going to Fushimi Inari, as they’re both along the same JR line. You can get a map at the Uji Station and take a walking tour of the sights, which are in a relatively compact area.

Your first stop would be the Byōdō-in Temple. To get there, you would pass through Omotesando, literally the main road leading to a shrine. On this approach are several shops selling tea and other tea products, including ice cream, dango, and Kit-Kats. The air would smell of freshly roasting tea, and you’d want to go closer to these roasting machines to inhale the smoky scent and warm your body up.

True to its name, Omotesando does lead you to Byōdō-in (entrance: ¥600), a World Heritage Site, originally built during the Heian period. Its Phoenix Hall is just gorgeous — and it has never been destroyed, making it almost a millennium old. 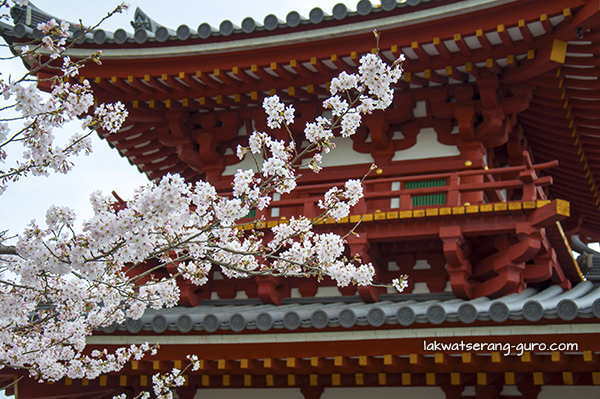 On the roof of the hall are two golden phoenixes, from which the hall gets its name, of course.

You can stroll around the garden and lotus pond, and then go to the museum inside. Marvel at the artifacts from the Heian period.

After Byōdō-in, you can take a very short walk to the Uji River.

During our visit, there seemed to be a spring festival as stalls flanked cherry trees on the riverbanks. Following everyone’s example, we bought some food and ate along the river as sakura petals floated around us with every passing breeze.

After our brunch, we crossed the vermilion bridge and, following the map, went to Ujigami Shrine. As the “guardian shrine” of Byōdō-in, it’s an unimposing building, but it’s also believed to be the oldest standing shrine in Japan.

Our last stop of the day in Uji was the Tale of Genji Museum, which had dioramas and displays of scenes from the novel. You could borrow a headset to guide you (in English) through the short film in its small cinema.

To cap off your visit, you could have a late lunch in many of the restaurants going back to the train station.

To go to Uji City, take the JR Nara line from Kyoto Station to Uji Station.