We were in the Gapyeong Tour Bus after having come from Nami Island. The tour guide was telling us all about our next stop.

Oh hell, of course I know who Do Min-Joon is. But I suppressed a giggle because Husband was with me and, well, Do Min-Joon wasn’t really there, save for the — er, essence of his alien presence.

Sidebar: Who is Do Min-Joon and What Does He Have to Do with This Post?

In the K-drama You Who Came From the Stars (also known as My Love from the Stars or Man from the Stars), Do Min-Joon (played by the dreamy Kim Soo-Hyun, who looks best in a hanbok) is this conveniently-Korean-looking alien who has been on Earth for 400 years now. He’s been crafting for himself different identities just to stop people from getting too suspicious. The conflict arises when he meets a girl, Cheon Song-Yi (played by the beautiful Jeon Ji-hyun of My Sassy Girl fame), a Hallyu actress who resembles a girl he’d met 400 years ago. Meanwhile, in this present-day “life,” Do Min-Joon is a psychology professor, but a few episodes in, he also poses as Cheon Song-yi’s manager.

So, scene: Cheon Song-Yi is left in Petite France following a shoot, where a production assistant has forgotten to let her know that her scene would be shot the next day instead. She wakes up from a long nap to see herself alone in a dark theme park.

Do Min-Joon is there, though, waiting for her. But Song-Yi is angry because of Min-Joon’s flip-flopping attitude towards her (silly because he obviously likes her). She screams at him, “I want you to know that you’re the most selfish person I know!” And she stomps off.

And then — and then — Min-Joon uses his telekinetic powers (he has lots of powers) to switch on all the lights in Petite France and make her fly towards him. She stumbles and he catches her.

“What are you doing?”

“It’s the most selfish thing I can do to you.”

And he kisses her, deeply.

And in the next episode, he falls sick, because he’s not supposed to mix saliva with human beings. Silly, yes, but it gave me sleepless nights due to binge-watching. If you haven’t seen it yet, it’s awesome, people. It’s so big in China that it set off a chicken and beer craze, gave someone a heart attack and others heartbreaks, and actually got Chinese officials talking about why they can’t come up with such quality show.

Petite France advertises itself as this French village/Le Petit Prince-inspired theme park. (Le Petit Prince and Petite France — get it?) Upon entrance, though, you’d see that what brings in the crowds are actually the shows which featured it.

Inside, though, you’d see it’s a pretty charming place. It features faux-cobbled streets, pastel-colored buildings, collections of dolls, marionettes and assorted other knickknacks (I avoided the marionettes), and sculptures based off Antoine de Saint-Exupéry’s illustrations. 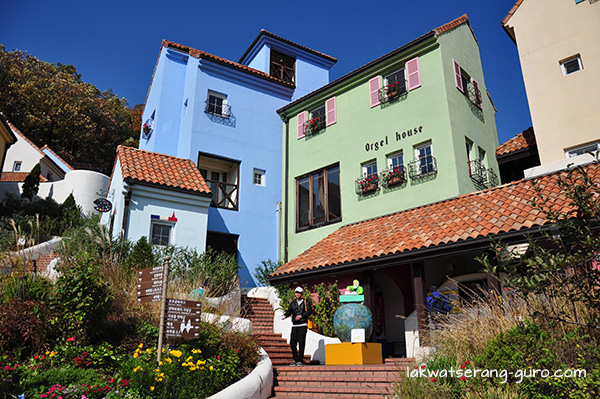 You can easily spend less than two hours here — it’s not a very big place. You may also spend a few minutes watching a puppet show in the small amphitheater.

Though the scenery is great and the art collections pretty interesting, it can get really boring fast. The place is just obviously inauthentic, a true-blue tourist trap. Don’t expect to suddenly gain new insight about The Little Prince, except maybe that Adult You has gotten really tired of wonder while the little ones still run about excitedly, finding beauty in the little things. Sigh.

In any case, it’s still worth a visit if you are a K-drama fan! I think that unless you have kids coming along, the only reason why you should go there is for the sheer giddiness you’d feel when you realize the familiarity that comes with watching You Who Came from the Stars about half a dozen times. Take a picture with the Cheon Song-Yi and Do Min-Joon standees (my husband had begged off).

Entrance to Petite France is ₩8000. The Gapyeong tour bus makes an almost-hourly stop here. We went to the Garden of Morning Calm afterwards, via the tour bus.

Get a 25% (₩2000) discount to Petite France by printing out the discount coupon here at the Visit Korea Committee website.