I just love how unique place names in Batanes are and how they make you pout your lips as they create sounds and stresses you never realized existed in a Filipino language: Kayvaluganan. Mahatao. Imnajbu. Ivana. The last place, which you pronounce with the stress in the first syllable (EE-va-na), is the last of the five (out of six) towns we visited in Batanes.

We finally saw the famous Honesty Coffee Shop along the main road. As featured in countless blogs and TV shows, no one mans the store; it relies on human decency. It used to be (and, in a way, continues to be) a store that catered to fishermen who just wanted a warm drink after an arduous journey. You buy coffee or snacks and put money in a drop box — so you either give the exact amount or leave the rest as tip.

On the way north, toward Basco, we dropped by the San Jose de Ivana Church, a national landmark. 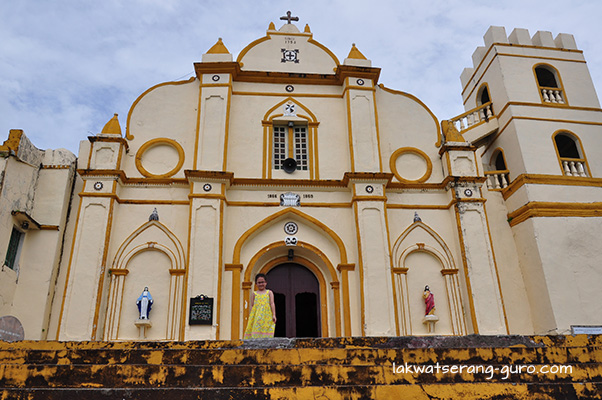 Next, we dropped by the House of Dakay and the Old Spanish Bridge.

We went to the White Beach next, and then entered a cave and came out at the Hohmoron Lagoon. Unfortunately, we couldn’t stay for long because the rain began in earnest. In the comfort of our van, as we headed up north, we saw the boats that dared go to Sabtang undulate with the strong waves.

The family that we were traveling with were staying the night at Fundacion Pacita, and that’s where we ended the day.

The family even persuaded us to have a peek at their cozy room overlooking the sea — which didn’t look too good, given the weather.

That concluded our tour. We still had two days left in Batanes, but it looked like we were going to spend the next day in the middle of a storm.

One thought on “A Tour of South Batan, Part Three: Ivana”