A little story: My fears about meeting an accident right before my wedding came to a head when, to the surprise of everyone except me and my close friends, I fell into the gutter of a crowded but dimly-lit street — and sprained my foot. Now I like to run and hike, and I have done muay thai and some dancing, but I sprained my foot while walking in the city streets, just because I’m clumsy. Story of my life.

(Doesn’t it annoy you when you fall down and strangers around you just stare at you and make tsk tsk noises? Even if you have a huge backpack and a heavy shopping bag?)

As it turned out, I had an avulsion fracture. My foot should have been placed in a cast, but I said, eh, it’s expensive, I’ll just wait it out a few weeks (with a promise to my mother that I will rest my foot). In reality, I would be really annoyed if I had to explore Batanes in a cast. I guess I was so insistent on getting healed that my body somehow conspired to allow me to walk down the aisle in my awesome maroon high heels.

So yes — the point of the rambling story above is that a beginner-friendly tour of Batanes was quite a challenge for me and my bandaged foot. But I was in Batanes, and there was no stopping a girl from exploring the place.

After Tukon, we went to see the Basco Idjang from afar. The idjang is a fortress built from natural landforms, and was where Ivatans of old hid against invaders or enemies.

It’s an archaeological treasure that, sadly, few Filipinos know about. I certainly did not know about them till we visited. (Here’s an interesting blog post that discusses Batanes’ prehistoric past. I wish I’d read this post before going to Batanes!)

Next, we went and crawled through a tunnel built during World War II by Ivatans under the command and threats of Japanese soldiers. You could see holes where the builders used rock picks to carve the tunnel. “Did people die here?” I asked the question with the most obvious answer.

We came out of another entrance which overlooked some beautiful Batanes scenery.

Valugan Boulder Beach was a special kind of challenge. No, actually, it wasn’t — it’s just that I insisted on walking on the rocks even with a sprained foot.

There were pumice stones that we could use as panghilod (I was really keen on bringing one home), but there were also huge ones that could crush a human being. These stones were spewed by Mt. Iraya during an ancient eruption — its last eruption was in 1454 — and were shaped into these round boulders by the Pacific Ocean. You can hear the rocks banging against each other with every wave. (And this is why Magellan should not have named it Pacifico.)

We went back to the Basco town proper for refreshments and to visit the town church. Next to the church is the St. Dominic College, the only private college in the province.

Our next to the last stop was the Vayang Rolling Hills, the highlight of our day trip. Bathed in the golden late afternoon light, the hills appeared like sharp green waves undulating toward the West Philippine Sea.

I’ve  had my fill of gorgeous places in the Philippines, but Batanes truly is something else. It is a beautiful thing to still be in awe of my own country. 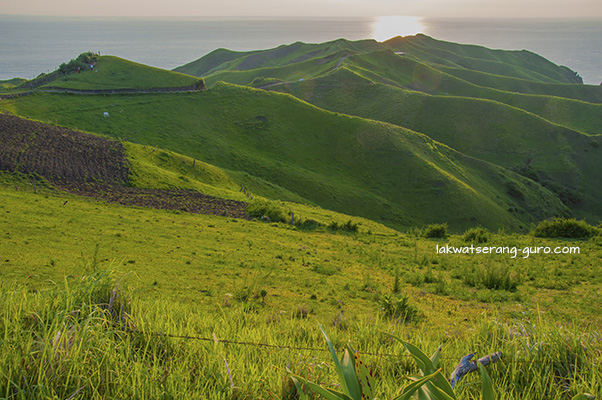 Finally, we headed to the lighthouse on Naidi Hills. Here, we ended the day by climbing up the winding staircase (not without effort on my part) and seeing sweeping views of Basco town and the sun dipping toward the sea.

And this was only our first day there. 🙂