Apo Island is a 30- to 45-minute boat ride from mainland Negros. It’s tiny, just about 12 hectares in area. Everyday there’s about three hours of electricity, from 6 to 9 in the evening. Rainwater is collected for everyday use, so sometimes, in the summer months, the homestays would have no water for you to use for bathing, and you’d have to go back to a hostel in Dumaguete to wash off the salt your body has accumulated.

Apo Island is also one of my favorite places in the Philippines. Surrounding it is a world-class coral reef with 400 coral species and 700 fish species. On the eastern side is a renowned community-managed marine sanctuary, which was unfortunately heavily damaged by the storm surges of Pablo and Sendong. However, the reefs on the western side of the island remain intact. 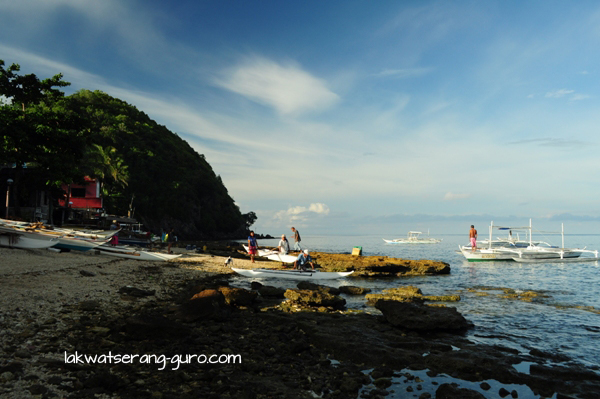 The friendly, accommodating people here make a living out of tourism and fishing. There’s no electricity, but there’s the sea breeze. And it’s so quiet. When you sleep in the dark at night, alone in your dorm room, with your mosquito net the only possible defense you could have against the tuko that seems so close it’s giving you goosebumps, you suddenly realize that there is no sound of motor vehicle or electrical appliance you’ve been desensitized to back in the city. The only sound you can hear is your breathing and the singing cicadas. And, of course, the tuko.

I’m in love with this place mainly because here’s where I went scuba diving for the first time.

How to get to Apo Island from Dumaguete

Coming from an early morning trip from Siquijor to Dumaguete, I asked around for a jeep to Zamboanguita. I asked the driver to drop me off at Malatapay. This effectively made other passengers ask me where I was going, what I was doing alone, etc. It was all good.

I made the stop at the Malatapay market. The stalls were closed as it wasn’t a Wednesday. Once I got near the shore, though, I found an eatery and the small tourism office, where I took a deep breath of courage and woke up a napping man to ask him about the public boat to Apo Island.

Since I arrived an hour and a half early for the next public boat, I went back to the eatery where I had my lunch of sinigang na bangus. I also chatted with a woman from whom I bought kakanin. It was a strangely nice conversation because I was speaking in Tagalog and she in Cebuano, and we could still understand each other.

Soon enough, by 1PM, I boarded the public boat with three other passengers and lots of vegetables. As it turned out, one of the passengers was actually a niece of Mario Pascobello, the proprietor of Mario’s Scuba Diving and Homestay — where I’d earlier booked a P300 bed in their dorm — so she helped me on my way.

It was a 45-minute trip, and when I got to the island, I paid the requisite P100 visitor’s fee and went to Mario’s. I was the only visitor then. I was shown to my room and was introduced to my diving instructors.

I’d booked an Introductory Diving lesson for P2500 — a very low rate compared to others — which would teach me the basics of diving on shallow waters and would take me to nearby Chapel Point at a maximum depth of 12 meters.  As it turned out, there was still time in the afternoon to do this little activity.

I got into rented gear and was taught some exercises and hand signals on shallow waters before my diving instructors and I headed out to the sea. I saw a row of sea urchins that seemed to stand sentinel against us invaders of the reef. And as we swam onward, I saw the seabed transform from mere rocks and sand to a glorious, colorful world of corals and sea creatures.

I’d snorkeled in other reefs before, such as in San Juan, Batangas and in Boracay, but Chapel Reef was so vast and colorful. We went around walls of corals and I saw some tube and branching corals, and fishes like lionfish and sweetlips. I’d never been so close to the corals and fish before, and being right by them, instead of above them, was a wondrous and humbling perspective to be in.

Then, my diving instructors gave me the hand signal for “turtle”. I looked around and gave the littlest underwater scream: there was a sea turtle perched on a coral, with three cleaner wrasses on its back. Just a few moments later, my instructors signaled to me again, and I had to look behind and above me to see a turtle swimming to the surface. It looked as if it were slowly flying to the sun above us all. I stared in awe. It was all so beautiful.

Time flew so fast and before I knew it, we were swimming back to the shore. Standing up again on solid ground reminded me of how heavy my oxygen tank and weights were. I dragged myself back to the world of humans. It was as though the sea had invisible hands pulling me back. 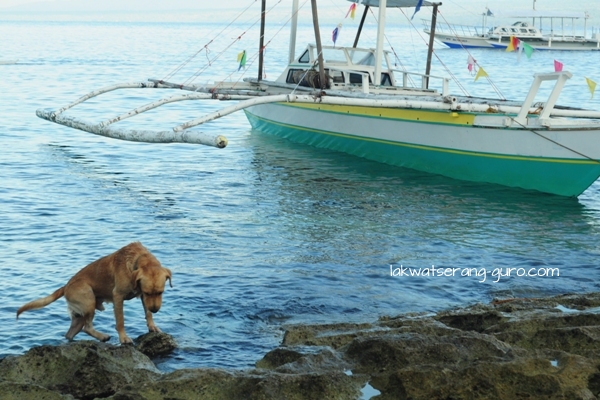 Back in Mario’s, I took a bath (mercifully, we had water — I was to find out later that another resort didn’t). Toward sundown, I took pictures of the rocky coast and watched as boats docked and a solitary dog went swimming. I’d spent two quiet sunsets by the beach by then.

Dinner was spent with my diving instructors and an American who arrived later in the afternoon. I had tinolang manok. Brian, being vegetarian, had squash, and I felt bad about my carnivorous self.

Among others, we talked about traveling. He’s middle-aged and well-traveled, while I said I still had so many countries to go to.

I wanted to point out the obvious disadvantage of us middle-class earners in a third-world country who want to go to, say, the US or Europe, as opposed to Americans and Europeans who come to very cheap Southeast Asia. But instead I said, chuckling, “I’d have to save up for a long time!”

“Here’s the thing, Fil,” Brian replied. “Don’t even think that you can’t do it. Just go there and everything will fall into place.”

I totally believed it then. Seven months later, I still want to believe it.

The evening, as I’d said, had electricity from 6 to 9, and guess what I heard from the dorm room? Videoke. But of course. Badly-sung power ballads were my background music as I put in a bit of work before the power was shut off again and the world was plunged to darkness and quiet. As for me, I had an uneasy sleep. The gecko worried me.

I woke up early the next day to go around the village and look for breakfast, which took the form of a couple of bread (P20), coffee, and my leftover mineral water. I also asked around how to go to the lighthouse.

As I climbed, paved stones gave way to a dirt track along a field where a couple of cows grazed lazily.

I wanted to climb the old lighthouse so that I could get a view of Apo Island, but I was alone and was afraid I’d fall with no one knowing. I decided that I had one too many adventures already.

Afterward, I had a long chat with a woman who sold sarongs as souvenirs in the village. I’d bought one and she told me to sit for a while to talk. We talked about our youth; she talked about settling in Apo Island with her husband who lived there.

I went snorkeling afterward, alone, at a depth farther than when I’d dived the day before (we had to take a boat to the place), while the dive instructors took Brian diving. I spent much of my time chasing after a nonchalant sea turtle and picking up plastic litter.

Later, toward noontime, I bid my goodbyes — to the people at Mario’s, the lady who sold sarongs, the woman who manned the tourism office. I took a very small motorboat that could take only one person other than the boatman.

I felt like I’d made so many friends already. I wondered when I was going to see them again.

Back to Malatapay, where I bought a banana cue from the woman who spoke to me in Cebuano. Back to Dumaguete via a non-aircon Ceres bus. Back to Mario’s, where I spent half of the afternoon sleeping.

7 thoughts on “Diving in Apo Island”