This blog entry should have been written last June if not for the takeover of my teacher life…and perhaps, even though the narrative was already running in my head as I was experiencing it, I still needed to digest what the whole experience meant. Or maybe I just got really lazy. 🙂

In any case, the year is about to end and I’ve realized that I haven’t written about my favourite trip this year—the five days I spent alone in Dumaguete and in nearby Siquijor and Apo Island—and that I should do something about it before I start forgetting even more faces and moments.

Five days in Dumaguete: My itinerary as it happened

I bought my plane tickets to Dumaguete on a whim when a co-teacher told me that class resumption was going to be later than expected. That meant I had two more weeks between my Southeast Asia tour and the faculty in-service training. Even then I was already feeling that I needed to squeeze every bit of time I have left in my youth.

After a three-week Southeast Asia trip, I almost didn’t want to go; I started to get cold feet about traveling alone, and I probably had travel fatigue by that point. But I’d already booked my flights and lodgings and decided to go ahead.

I arrived early in the morning, and after walking a little ways from the Dumaguete airport, I got myself dropped off to Harolds Mansion Hostel. I found out later that this was an ideal place: it was near Silliman University and a few minutes’ walk to Rizal Boulevard, which faced the sea. Upon dropping off my bags, I went to the reception and asked about how to go to the twin lakes of Balinsasayao and Danao in Sibulan, and to Casaroro Falls in Valencia. I found out that Valencia was west of Dumaguete and Sibulan, north, and couldn’t possibly visit both on one day, so I decided on a whim to go to the lakes in Sibulan instead.

I had to go to the plaza and take a jeepney there to the town of Sibulan. From there, I had to take a habal-habal for a steep price of P300. I was to find out that it was for good reason, as the trip was 45 minutes long. I was holding on for dear life as the motorcycle traversed alternating paved and stony roads that wound left, right, up, down the mountains—and neither kuya nor I had a helmet. The trip seemed endless! I chatted with kuya to distract myself, but mostly I allowed myself to look at my lovely surroundings (except when there was a ravine beside us!).

Yet I felt my being alive on my very skin, knowing that this was a dangerous thing I was doing and I could fall off the motorcycle and, I don’t know, die. And yet I was doing it, really going through it, to see beauty that’s so hard to find nowadays.  I remember having an epiphany here: I really am a Sagittarian.

When we neared our destination, I breathed in the dewy scent of the forest—one of my favorite smells in the world. I paid the fees and finally got to the visitors’ area of the Balinsasayao Twin Lakes Natural Park. I was one of the three visitors that morning; a couple from Switzerland came moments after I did.

I had a quick brunch and chatted with the caretaker, Kuya Mark, before I went to walk the paved walkway to a view deck to see Lake Danao. When Kuya Mark said “paved”, I was relieved as I was wearing only slingback flip-flops and a dress. Surprise, surprise: owing to the rain the previous day, the ground was difficult to walk on, and I was so worried about slipping as I was alone. I was muttering words of encouragement to myself all the way.

About half an hour later, I made it to the viewing deck where I could see both Balinsasayao and Danao Lakes. I rested here, almost in disbelief at the blueness of the lakes.

As I headed back, I went closer to the shore a few times, washing my now-sweaty face and admiring the clear waters. Closer to the visitors’ center, locals washed their clothes. I, being geographically challenged, managed to lose the path and had to climb some rocks before I got back. It was good for photo opportunities though. 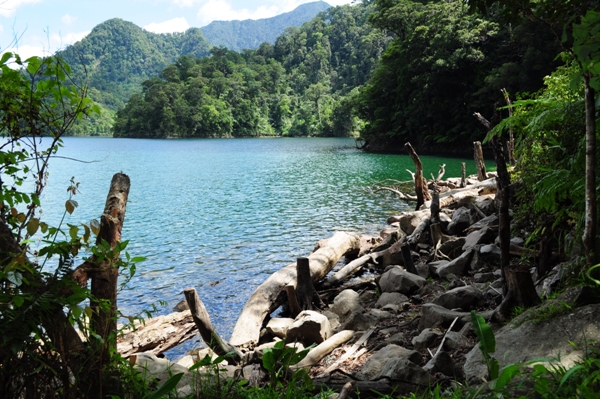 I headed back to Dumaguete and spent a fair bit of time in Silliman University. It was a strange feeling, having been let in by the guard in a university without him asking me for my ID. I almost felt like a fugitive. I really wasn’t in Manila anymore.

There were students playing Frisbee on the field by the amphitheatre. I sat there to rest, gaze at the university chapel, and read a bit of Rosario Cruz-Lucero’s amazing La India, or Island of the Disappeared—aptly set in Negros. I also headed to the museum—the exhibit on the tools of the mambabarang was the one I found most interesting.

I then walked to the Church of St. Catherine of Alexandria, better known as the Dumaguete Cathedral, which of course was right across the town plaza.

Next was the famous Sans Rival (as recommended by a former student), where I had a plate of spaghetti and a sans rival. It was so good.

Then I went to Rizal Boulevard and people-watched as I took photos. I was rather late for sundown, but the evening breeze was refreshing enough.

After sunset, I went back to Harolds. I put in a bit of school-related work before I went to sleep.

24 thoughts on “Traveling solo in Dumaguete: a late blog post”