Traveling alone, albeit only for five days, meant that I had people asking me—why? Why alone, especially as a single woman? My mother asked me if I was going through a crisis. (This, coming from an OFW in the Middle East.) My boyfriend wanted to tag along, to which I vehemently said no, I wanted to meet hot, tanned foreigners in board shorts (ha!). My friends were incredulous: “Wouldn’t that be lonely? Who’s going to take your pictures?!” When I was conversing with locals, it was always the follow-up question after “Who are you with?” It doesn’t help that the lonely Filipina traveler is few and far between. We’re a culture that puts premium on relationships with our families and barkadas, I think, and going to an unfamiliar place with no support is quite unheard of in many circles.

Well, there was no crisis, I certainly didn’t go looking for fellow lonely travelers, and yeah, I did feel lonely, but only for short bursts of time. I did it anyway—for experience, for all those years I squandered staying put in Manila because I didn’t have anyone to travel with, for a break after weeks of traveling with a group. But looking back, I think I was mostly testing my strength. Others are doing it for months at a time; why not I for only five days, and with internet access to boot?

Oh, and I didn’t tell my parents that I was also going to Siquijor, land of magic and sorcery and the mambabarangs and whatnot. I was sure this was going to get disapproved. (Sorry, Ma, if you’re reading this.) From friends I got admonitions that I shouldn’t pick up a rock and bring it home and that I should be extra nice to the people there. Okay, I’d said; anyway, I’m nice.

These were in my thoughts as I waited for the ferry that would take me to Siquijor on my second day in Dumaguete. I’d had a quick carbo-loaded breakfast in Harolds Mansion before heading to the ferry terminal. I must have been feeling sleepy still as I misunderstood the directions of the ticket seller. If I had a friend with me, I thought, he’d probably laugh at me.

In any case, I boarded the rather empty ferry and was on my way to Siquijor by 9am on the Delta Fast craft (P125, plus P15 for the terminal fee). Over an hour later, I was in Siquijor, marveling at the clear waters and the wide, white sand beach of the port.

Someone from the local Department of Tourism noticed me (looking very much like a tourist acting nonchalantly, I bet), and I found myself asking him how to get to Villa Marmarine, where I’d booked a room. He then directed me to the office, immediately telling me that I could also avail of the various land tours via tricycle with the published rates posted outside.

There were three choices for me: I could take a coastal land tour on the Siquijor Circumferential Road for P1000, or a mountain tour, with the tricycle climbing Mt. Bandilaan in the center of the island for P1200. Or I could take a mountain tour and a land tour in one for P2000, which meant cutting across Siquijor island from north to south, and then going eastward on the coast, back to Villa Marmarine. Of course I chose the third option, which included my ride from the port to Villa Marmarine and back. (One downside of traveling alone: you don’t have anyone to split the fees with.)

After taking pictures of the Church of St. Francis of Assisi, just across the port, I had lunch in Villa Marmarine before heading for the tour. Admittedly, Villa Marmarine was my most expensive accommodation to date (P800 for a double room and P190 for meals), but I did like the ambiance. It’s in Brgy. Candanay Sur in Siquijor town, which means it’s near the port and is right in front of a gorgeous, powdery white beach (though strewn with leaves when I got there). The beach here remains shallow even if you’re meters away from the shore.

After lunch, I got back on the tricycle. We headed first to Cantabon Cave, where I was to go spelunking (guide fee: P500, entrance: P20). After several silent questions of “Why the hell am I doing this again?” I went ahead, armed with a helmet and helped by two guides. 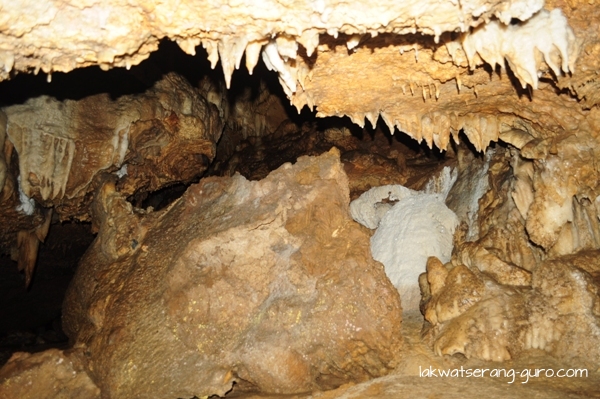 After some minutes of slow, careful treading, bumping my (mercifully helmeted) head on the stalactites, and admiring the rocks illuminated by my guides’ flashlight, we came across a sign saying “Mini Swimming Pool”. My guides encouraged me to take a dip. It was very refreshing—and cold!

About an hour later, we got back aboveground. I’d done so many things in two days, alone, and I was looking forward for more.

7 thoughts on “A long day tour of Siquijor (part one), Cantabon Cave, and on traveling solo”