My whole Southeast Asia tour sort of expanded itself from one simple plan: to see the temple-strewn land of Bagan in Myanmar. I’d read all about how one could climb up a temple at sunrise or sundown and see many, many temples as far as the eye could see while waiting for the sun to peek out of the horizon. The very thought excited me, and one day last year I decided that I should go to Myanmar.

We arrived in Nyaung U at 4 AM on May 8th, still sleepy from a very comfortable ride, so we weren’t prepared for the barrage of horsecart drivers jostling for passengers. It took us a while to gather our wits and accept a ride to Bagan, which was a few kilometers away, for 12000 kyats. We probably got ripped off, but as it turned out, it was a rather long ride.

The sky started turning purple as we bounced about in the horsecart. I was just wondering if we could start our tour already then and there when our driver pointed to a nearby temple. “Would you like to see the sunrise?” he asked.

I was mystified. We agreed, and we got to the temple to find that we’d arrived after visitors who’d gone on bikes and tourist buses. I went up the temple (which I later learned was Shwesendaw Paya) and saw the travelers already facing the twilight. It was bright enough such that I could already take pictures.

A few minutes more and a hush fell upon everyone when the sun started to peek out of the horizon. 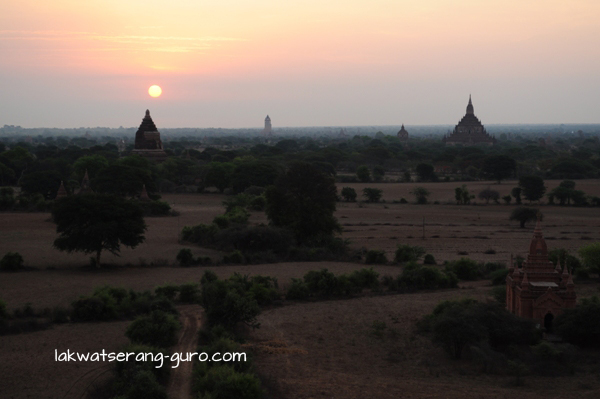 It was just marvelous — there were just so many of them! They were none as grand as Angkor, it’s true, but there’s a different sort of sacredness in the sheer number of temples that we saw that morning.

And yes, that morning I was more than ever convinced than I can make my dreams of travel come true.

2 thoughts on “My first sunrise in Bagan”