The stones here speak to me, and I know their mute language. Also, they seem deeply to feel what I think…. But I am a ruin myself, wandering among ruins.

We spent our third day in Thailand exploring the ruins of Ayutthaya, the old Siamese capital. It used to be one of the biggest cities in East Asia; European chroniclers in the 1600s talked of its power and prosperity. It was strategically located as it sat on an island surrounded by three rivers.

In 1767, Ayutthaya was ransacked and burned down by the Burmese. Survivors went south to Thonburi (now west of Bangkok) to regroup and build a new capital under a new leader. Nowadays, you can see only the most massive vestiges of the grand kingdom that it used to be. A small town has grown around it, and the ruins have been listed as a World Heritage Site by the UNESCO.

I’ll be the first to admit that it’s been difficult to appreciate old temples since I went to Angkor last year. I had to think of Angkor and Ayutthaya as two separate things altogether, both with different histories of power and ruin. Angkor, it seemed, declined slowly, as its people abandoned it for unclear reasons; Ayutthaya, meanwhile, was destroyed almost overnight, though it was already under threat of invaders for years. During its final hours, Ayutthaya was sacked and razed to the ground as its starving inhabitants were slaughtered by the Burmese army. Many temples were destroyed. In this website, you could see that there are no traces of where many certain temples used to stand, according to historical records.

We started our tour via songthaew (a sort of small minivan) at around 11:30am after long train delays. It was a little crazy taking the tour at high noon — I spent too much on beverage that day. And it’s really difficult to imagine that I could still get darker after Palawan and Ilocos, but here I am.

I always try to imagine what a certain ruin must have looked like at the height of its use. (I sometimes close my eyes and touch the stones while doing so, as if my fingers could soak up their history, as if my vision could allow me to see the royal people of old.) In Ayutthaya, though, it was difficult. Even at first glance, the story of its destruction is more palpable than the glories of its heyday. Nonetheless, you can find traces of how grand it used to be.

The next wat we went to was a little farther off. Wat Phu Khao Thong (“Golden Mountain Temple”) is located outside the city island. There is a monastery nearby, but of course it’s the chedi that amazed us. We climbed the base of the chedi and enjoyed the view and what little breeze was there.

Going to the wat meant that we had to pass a long boulevard. Near the wat stood a monument to King Naresuan, a king who was considered a hero for liberating the Ayutthaya kingdom from the Burmese (more than a century before its eventual, final fall from the Burmese, of course).

Going back to Ayutthaya proper, we visited Wat Wora Chet Tha Ram. It used to be a massive crematorium built by the younger brother of King Naresuan. This was an ideal place to stop and cool down because of the wide open space around it. 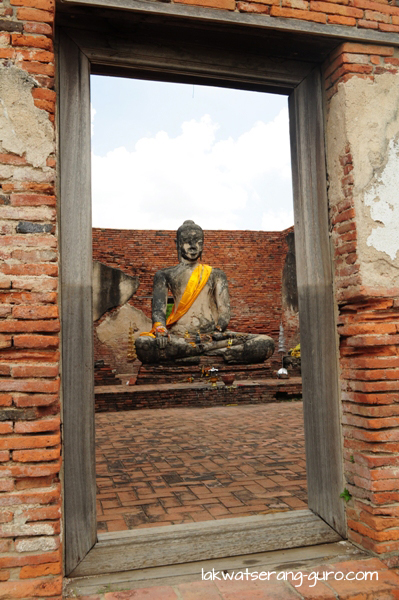 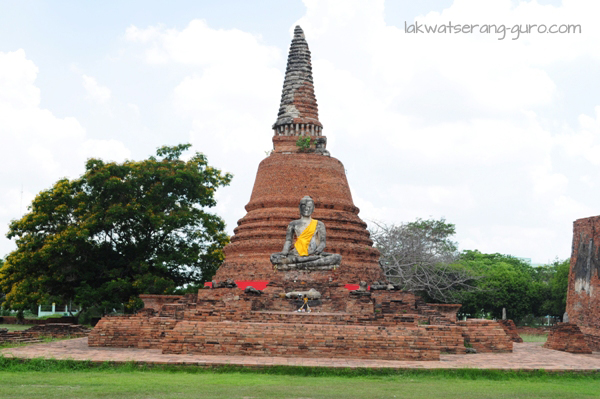 Next, we went to Wat Lokayasutha (“Temple of the Reclining Buddha”) where there was this fantastic wat with a weathered reclining Buddha next to it. Since we’d gone to Wat Pho the day before, this was a stark reminder of the old and new Thai kingdoms. 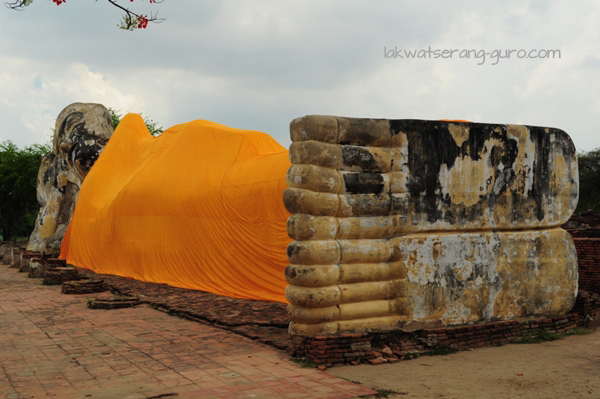 Wat Phra Ram (entrance: 50 baht) was next. This was just outside the Grand Palace, and it used to be a crematorium for a king. Apparently its construction shows Khmer (Cambodian) influence.

And perhaps the most photographed wat in Ayutthaya is Wat Phra Si Sanphet (entrance: 50 baht), located within the Grand Palace grounds. This was the most important temple in Ayutthaya.

There was massive restoration ongoing when I visited. I eavesdropped on a tour guide, who told his group that owing to the 2011 flooding….. of Ayutthaya, the city is undergoing recovery not only of the temples but also of the centuries-old drainage and waterways system built by the founders of the city (see article here).

Temple fatigue was beginning to settle in by the time we finished our three-hour Ayutthaya tour. We went back to the mainland and had snacks — and here I had the best pad thai in my entire stay in Thailand. I’m ashamed to say, though, that I’ve forgotten the name of the restaurant! I just know it’s on a small street which takes you from the ferry terminal to the the main road next to the train station.

The guesthouse across the restaurant allowed us to use their bathroom and shower for 30 baht each, so at least we took the night train to Chiang Mai feeling refreshed. 🙂

How to get to Ayutthaya from Bangkok

One thought on “Around Ayutthaya on a Songthaew”