Day 2 of my Zamboanga trip took us to the Great Sta. Cruz Island, touted as one of the best beaches in the Philippines because of its pink sand. I’d already been to Subic Beach in Sorsogon so I was prepared not to be too overwhelmed. 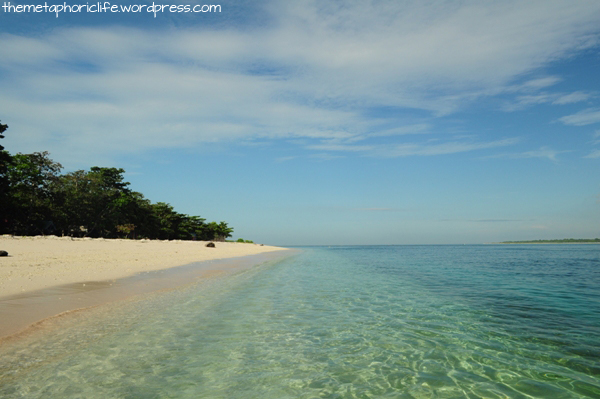 In terms of pink-ness, the Great Santa Cruz Island clearly wins, hands down. It is a little more difficult to swim, though, but maybe that’s because I forgot to bring my goggles.

I don’t think many Zamboangueños have gone to Sta. Cruz even though it’s just a 15-minute boat ride away because not too long ago, the area was infested by bandits. Basilan, after all, is right behind the island (though I do wonder now if I could go there on a trip…). A recent local campaign, however, has put it back on the tourism map. You’d have to register at the Department of Tourism office before getting to the island from Paseo del Mar, right beside Fort Pilar. Our boat had a police escort, and police with huge guns were actually patrolling the area while we were there. Still, I felt safe.

The infrastructure in the area consists of small nipa huts and shower rooms. There isn’t even any fresh water beyond the drum of water in the shower rooms, so clearly, we had to go back to the city to wash up. I was told that there were plans to create a resort here, but the workers apparently dug up saltwater underneath whatever flimsy foundation there was. I think the island is lovely the way it is now, in a rugged way — the city is so close, yet here, you can pretend that you’re in paradise.

We stayed on the island from around 7:30AM till noontime. We had a pleasant meal of sandwiches, small crabs, and mangoes.

Since the island is a protected area, we couldn’t bring home sand, shells, or anything greater than the sand stuck on our feet and slippers. I did bring home a pretty rock that day, though. 😉

“Take pictures of the most beautiful city hall during Christmas,” Ralf had told me. So that night, after a filling dinner at Mano-Mano’s, we went to the city plaza again.

I might have let out an “Oh my God!” of amazement and disbelief at this. The Muntinlupa City Hall is surely embarrassed. 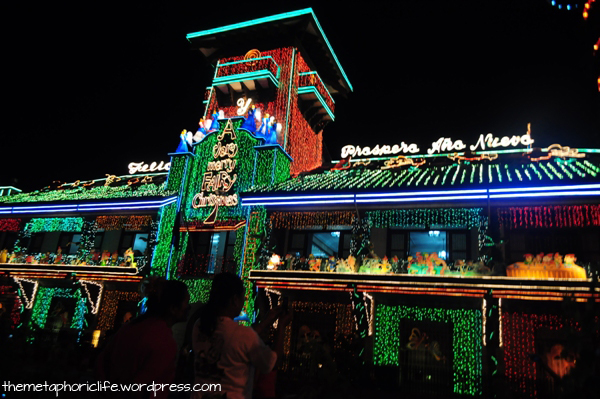 This is awesome in an ironic way — I mean, take the most hallowed government ground in any city and put a huge light show saying “Have a Merry FAIRY Christmas” with moving elves by the capiz windows, and you have the prettiest, quirkiest city hall of all.

Walking around the area brought us to the Rizal monument, flanked by actual canons with intricate designs — and more varicolored lights.

The last part of this series: Mt. Abong-Abong and Pasonanca Park