I was in Iligan last week for a five-day work-related visit. The “work-related” part deserves another blog entry altogether, as it was the most wonderful and humbling experience, but I won’t write about that here because I really don’t want to give away the school where I teach (though I’m pretty sure my three or four followers have a pretty good idea). So I’m going to tell you about the sightseeing and food-tripping adventures I had instead.

Apparently there are more than 20 (!) waterfalls in and around Iligan City, and those doing a day trip could easily visit the three most popular: Maria Cristina, Mimbalot, and Tinago. We covered both Maria Cristina and Mimbalot, plus the Timoga Cold Springs, in one afternoon.

Above is the famed Maria Cristina as you’d see it during weekdays. As our Sibika at Kultura teacher in elementary has taught us, the National Power Corporation harnesses Maria Cristina’s power to generate a huge percentage of electricity for the city and Mindanao. It flows from the Agus River, which gives the name to several power plants — Maria Cristina particularly powers Agus VI. NPC has built a Nature’s Park around it (entrance: P35 for adults) with scenic views, a zip line, and a small zoo.

Oh, and do note that Maria Cristina has a twin drop, though you can see only one in the picture above. On weekends, at around 11AM, the NPC opens the gates (or whatever technical term they use for it, hehe) for the tourists to see the falls in all her majesty.

Mimbalot Falls is a smaller falls of the cascading type. It’s neither high nor powerful, but it’s still a pretty sight. Near the bottom are little concrete tables and chairs where you could have a picnic right in front of the falls.

You could go nearer and get photos taken by ascending some stone steps. Entrance to the area is P15.

By the road from the NPC Nature’s Park to Mimbalot Falls, you’d see the resorts of Timoga Cold Springs beside each other. What’s awesome about the pools here is that they truly have fresh water coming all the way from Lanao Lake through the rivers passing through Iligan. We went to Dela Mar Resort, where there is an Olympic-sized pool with damn cold water. The good thing though is that there is no smell of chlorine in this pool, nor is there the slippery feeling of water in other public swimming pools — it really felt like fresh spring water.

You’d also see the Macaraeg-Macapagal Ancestral House nearby. It wasn’t our destination, but here is a nice post about the place. Apparently you could see, among other things, the office of President Diosdado Macapagal, President Gloria’s old playhouse, and yes, a portrait of GMA as a teen wearing a blanket tied across her chest. If that’s interesting enough to you, well, admission is free here.

A few days later, after we were done with “work”, we went to this seemingly enchanted place called the Tinago Falls.

Before that, though, we had a stopover at Timoga again to buy lechon. There’s a good stall almost right across the Macapagal-Macaraeg House. We bought a couple of kilos (P350/kilo) with rice wrapped in woven coconut leaves — they call these pusô. The lechon, meanwhile, is just a bit salty with a hint of herb and garlic. I have to say, this was the most delicious lechon I have ever tasted in my entire life.

Then it was time to descend the 434 steps to the Tinago Falls. Here’s what you’ll find at the bottom.

It was easy to imagine myself as a fairy here. The waterfall cascaded down to a green-blue lagoon, from which mist rose, filtering the shafts of morning sunlight. There were children and teens already there, climbing up rocks and somersaulting through the air down to the deep pool below.

We borrowed lifevests (P20) and went to ride the raft (P15/person) that was pulled by a couple of young teens. The older one, probably around fourteen, already sported six-pack abs that would put my male students into deep shame — and he didn’t even need to go to the gym.

It was so gorgeous.

We stayed here all morning. When it was time to leave, we had to take the 434 steps back up. It was as though the Tinago Falls made leaving difficult. Truly, it’s all I remember whenever I feel the muscle pain in my calves, even today, four days after.

Obviously the city is awesome for a lot of things, but I’ve yet to tell you about the food. I’ve mentioned the lechon that could give the Cebu variety a run for its money, but there’s also the seafood. We’d gone to Tita Fannie’s (which has many branches around Iligan, but we ate at the one near the cathedral). We loved the liempo and kinilaw. We also ate at Tatay’s Grill near the main road — they show you the fresh catch and you simply point to the one you want cooked. We had the most delicious prawns, calamares, and fish here. But I can’t forget Kuya Nestor, the cook for the school we stayed at, and his cooking — particularly the monggo (who knew it could be so delicious) and the alimasag sa gata. It was foodie haven! Just a few hours after coming back to Manila, I realized how crappy the food here is. I mean, my dad can cook the best buttered prawns anywhere, but I suppose nowhere in Manila could you find prawns as fresh as the ones we had in Iligan.

Here’s an interesting fruit — the marang. It’s like jackfruit, but friendlier as you can open it easily. Its insides reminded me of a sweeter atis. Delicious. Unless you go to Iligan or anywhere else that has marang, you won’t get to appreciate it because it’s not easy to transport — it’s quite squishy and bruises easily when mishandled. 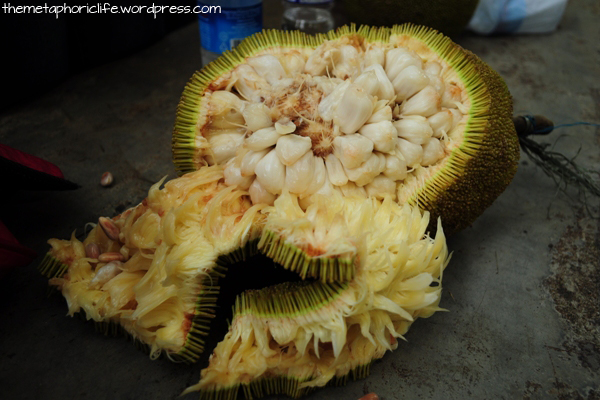 If you wanted pasalubong to bring home, buy Cheding’s peanuts, available at their main store near the market, or just buy Vjandep’s pastel in original yema flavor near the Cagayan de Oro airport. Buy many boxes of it — so be sure to purchase several kilos of check-in baggage beforehand.

In the afternoon, we got to visit the coconut farms as well as the areas that were hardest hit by the typhoon Sendong. We’d been hearing tales about Sendong all week, about how the water came rushing from the mountains, about how logs clogged up a main bridge like a dam and spilled water across the surrounding areas, flooding whole communities in a matter of minutes, having enough time only to wake up their fellow family members. Of course I remembered only the harrowing images on TV and the Internet: babies drowned in mud, a sobbing woman who can’t find her mother and child…yet nothing prepared us for what we did see. We saw abandoned houses where whole families drowned, beside other houses whose residents had gone back. We went around the Orchid Subdivision, which sits on the floodplain of a river. It was heartbreaking and frustrating because it’s the same story we’ve heard after Ondoy and this year’s monsoon in Manila — subdivisions are built on floodplains and other disaster-prone areas. Add to that the illegal logging in the mountains that caused water, mud, and logs to slide down to Iligan and kill hundreds of people, and the LGU’s alleged misuse of funds intended for the building of new houses. Other people would say that it had been God’s wrath that caused the disaster. No, it was only us humans who could do this to our fellowmen.

We went to the relocation site where the church and other private sectors helped build homes. Houses were still being built when we arrived. It’s been almost a year since the flood, and the city is still slowly getting back to its feet. 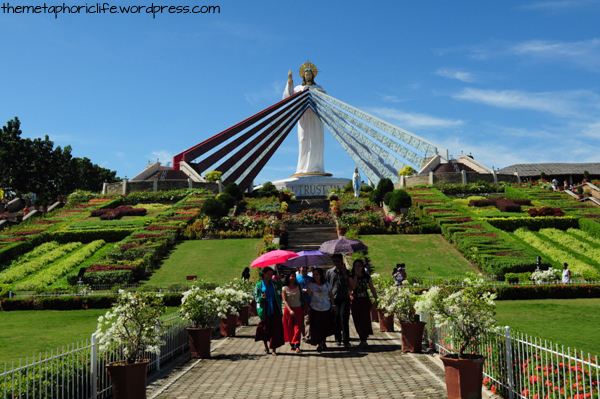 Here’s a bonus picture of the massive Divine Mercy Shrine on the way to Cagayan de Oro from Iligan. You could climb up to the heart of Jesus on this popular pilgrimage site. We didn’t go as it was too early then (it opens at 2:30 PM), but it was just too interesting not to see.

I’d like to thank the warm and generous teachers and brothers of Iligan who welcomed us, showed us around the city, and shared their week with us. We are overflowing with gratitude. Till our next meeting! 🙂

5 thoughts on “Travel Tales: Things to do in Iligan City”