One day last week, while I was thinking about the beaches I should see next, I got a text from my friend Edison. The message went something like this: “Join ka Camsur? Caramoan. Eto ang maganda dun sa Thursday na wahahaha”

And two days later, I was on the bus station going to Naga, on the way to Caramoan.

I was with a couple of friends from the workplace, their friends + a three-year-old daughter, and my boyfriend. Eleven, all in all. I’ve been starting to get used to new travel buddies. 🙂 It was quite a hilarious crowd.

A shot description: Caramoan (pronounced ca-ra-mo-AN) is a secluded municipality in Camarines Sur. Much of the land area is on the Caramoan peninsula; the rest is on the outlying islands. Its geographical features are a gorgeous mix of gently rolling hills and jutting rock cliffs, of lush green forests and powdery white beaches. It has recently become popular as a tourist destination because several international franchises of the Survivor series have been filming here since 2008.

How to get there: At the moment, there is no easy way to get there. (There have been plans to build an airport, though.) You take a bus, train or plane to the bus stations in Naga or Pili. We took a Peñafrancia bus with comfy recliner seats at the Cubao bus station beside Ali Mall. (Other buses that operate to Camsur are DLTB Co., and Isarog, which has sleeper buses.) This is the easy part of the trip.

The Travelers Camp, the inn we stayed at, arranged the rest of our trip including transfers. We took a van provided by them from Naga to Sabang in the town of San Jose — this took a little more than an hour. (Our driver even brought us to the Camsur Watersports Complex, which was deserted at 7AM.) Now, Sabang has no port — it’s merely a beach in which everything you do has a fee.

The motorboat we used to get to the Guijalo port in Caramoan was so small and packed, I refuse to think that it was under capacity. And the steering wheel of the boat actually broke while we were in the middle of the sea! Two boats, one after the other, had to tow our boat to Guijalo. This part of the trip took us a grueling and stressful three hours that in the middle of it, we were already tired of the sea.

Another way to get to Guijalo port is via ro-ro from the Nato port. We took this route on our way back to Naga. It isn’t comfy in the ro-ro either, but at least there’s leg room, and you can walk around.

Anyway, from the port, we took a couple of trikes to barangay Tawog. Travelers Camp is a couple of minutes’ walk away from the municipal hall there. And since we arrived late (1 PM instead of about 10 AM), both our breakfast and lunch were already served.

Not too long after, we went island hopping via the small port in Bikal, a ten-minute trike ride away.

We first went to Lahos, a charming little island that is a little more than a mound of white sand between two rock cliffs. Aside from taking pictures (mainly of ourselves of course), we went snorkeling. There were sea grass and schools of little fish not far from the shore. 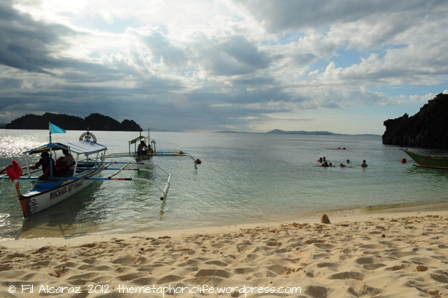 Next stop was Matukad Island, which boasts of powdery white sand that can rival Boracay’s. Moreover, the water is cleaner! It also apparently has a lake in its midst.

The next day, we went to islands that are a little farther from the peninsula (about an hour away, but honestly by then I wasn’t aware of the time).

The Manlawi Sand Bar near the island of Lahuy is a wide expanse of brownish-white sand that stretched even farther as the morning wore on. Here, we rented a floating cottage, where we ate lunch provided by Travelers Camp.

Also, we created a music video. Kelangan eh. Please like the video because I want my friend Moore to reach stardom. :>;

Next, we went to Bugtong Island, a lovely place with a sandbar which disappeared less than an hour after we arrived.

We snorkled a bit when the sandbar disappeared. There were corals and little fishes, and the largest sea urchins I’ve ever seen. Saying they’re a foot long is a gross underestimation!

We went swimming in a creek that went through a cave later in the afternoon. And then it was evening too soon.

Another thing to see is the Church of St. Michael the Archangel, which is made entirely of red brick. Later in the evening (as it was the barangay fiesta), some of my companions went to see a pageant for males. It was apparently a little strange. 🙂

While I hope that tourism in Caramoan will grow stronger especially with the airport being planned, I still hope that it will retain its pristine, countryside feel. I loved that here were miles and miles of thick forests without the scars of civilization like the ones, say, in Batangas. I loved that I could almost see the underwater life as we rode our boat from island to island. I hope that CamSur does not suffer from overdevelopment, especially not Caramoan.

We found The Travelers Camp to be a cozy family-owned inn overflowing with food! I still salivate at the memory of their laing and their Bicol express with bagoong. They even fixed the videoke for us. 🙂 Their all-in package (transfers, environmental and terminal fees, boat and snorkeling gear rental for island hopping, seven meals, and two rooms with twin beds and an extra mattress each) cost us P3,500 each — not bad at all for a summer package! Contact the very friendly and accommodating Engr. Jun Padua at (63917)8746437, (63919)8491694 or (632)6563851. Email address is thetravelerscamp[at]gmail[dot]com.

I’ve been very fortunate that I’ve gone to really beautiful beaches here in the Philippines this summer.

5 thoughts on “Travel Tales: Caramoan is something like paradise”